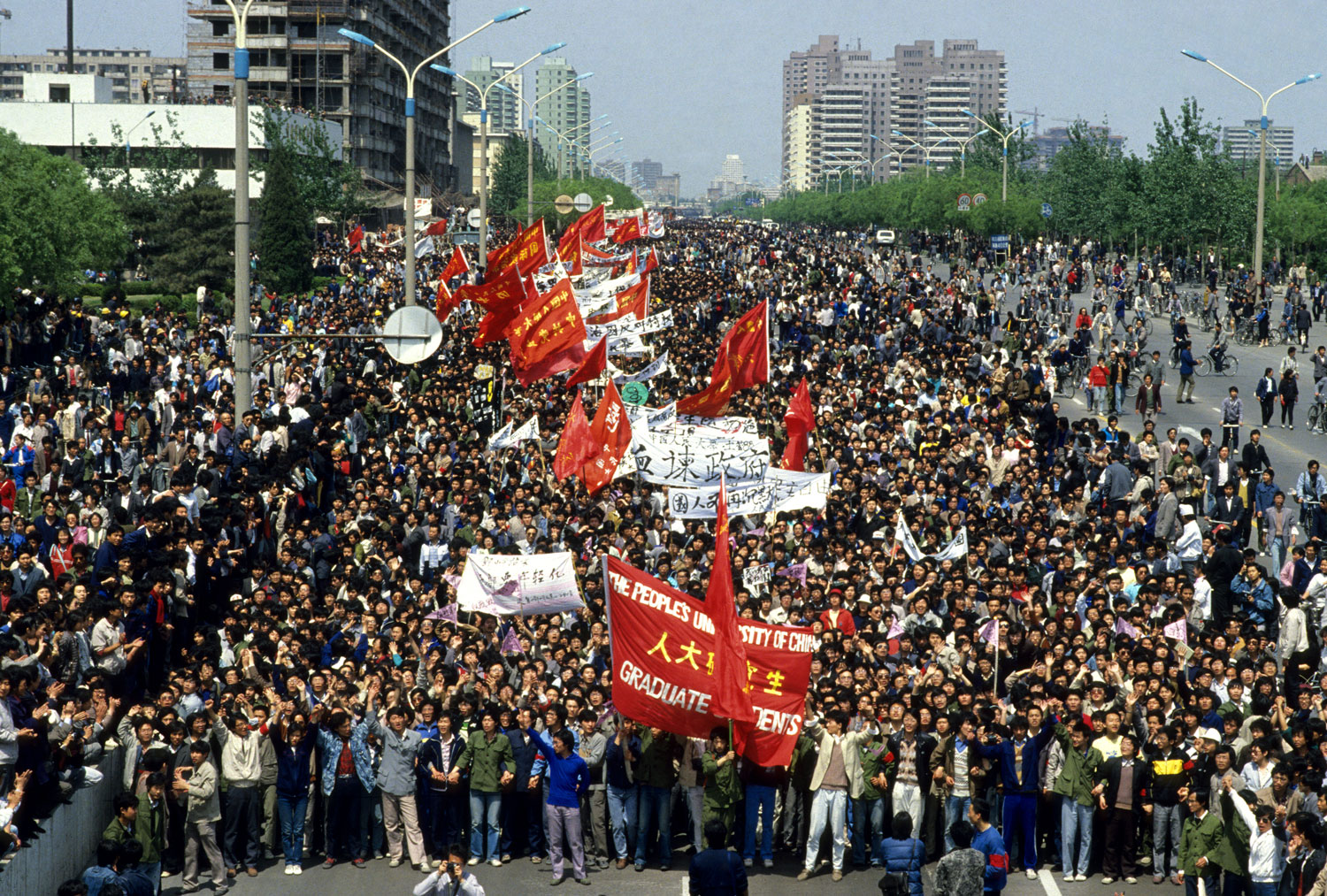 In the spring of 1989, an audacious generation of students challenged China's Communist leadership in a series of pro-democracy protests at Beijing's Tiananmen Square that shook the country to its core.

The government responded by ordering the army to use tanks and automatic weapons to shoot its way through the crowds and force the students to abandon their cause and the square. An unknown number of people numbering at least in the hundreds, were killed or wounded in the crackdown on June 4, 1989, mostly in the streets leading toward Tiananmen Square. Thousands more were arrested and detained, with the most active protesters imprisoned. Some workers who joined the protests were executed. Thousands of officials who did not support the crackdown, including Communist Party Secretary Zhao Ziyang, were ousted from their positions in a widespread government shakeup.

The 30th anniversary of the crackdown is Tuesday.

My husband Forrest Anderson and I covered the protests, he as a photographer for Time magazine and I as a stringer for Time.

Forrest’s photographs and those of 11 other photojournalists who covered the demonstrations and crackdown are part of an anniversary exhibit, Images of Tiananmen and Beyond: Twelve Photojournalists Tell the Story, at the Foreign Correspondents Club in Hong Kong, North Block, 2 Lower Albert Road, Central, Hong Kong from June 6-30.

An opening reception will be held on June 6 at 6:30 p.m. at which attendees can chat with journalists who witnessed the protests.

Forrest and I also are releasing a second edition of our photo-illustrated book, China’s Silenced Scream: A Visual History of the 1989 Tiananmen Protests. 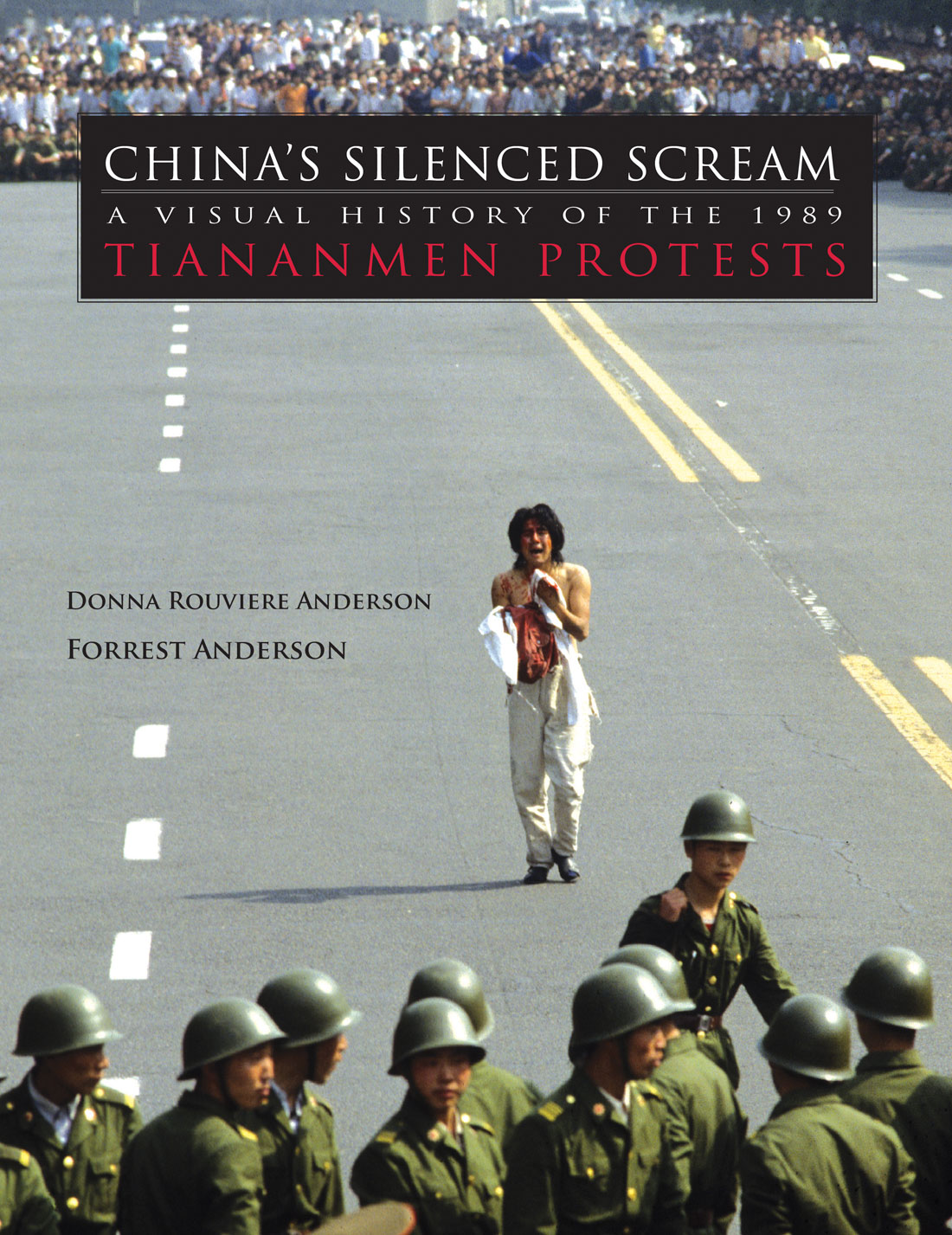 The new edition draws on information that has come to light in the past 30 years about the main participants on the student and government sides, as well as the reaction of U.S. government officials and other foreign observers to the crackdown.

The original version of the book, which is no longer in print, told the story of the protests and crackdown using more than 150 photos that Forrest and some of our photojournalistic colleagues took. We have updated the book to place the protests and crackdown in the broader context of Chinese history and politics before and since 1989. It considers the development of Chinese politics with regard to democracy, human rights and other issues about which the students protested, as well as the Tiananmen incident’s impact on Sino-U.S. and international affairs.

The book looks at how democracy, state ideology, corruption and other concerns that the students protested about are dealt with in China today and how they affect the now-powerful nation’s domestic and foreign policies.

The book draws on a deeper understanding of the protests that I gained while completing a masters’ degree in public history with an emphasis on modern Chinese politics and in subsequent research and writing about Chinese political history.

The book is a valuable resource for students, teachers, and anyone else who seeks to understand the history and significance of the movement. It includes more than 160 historic photographs, an index and a bibliography.

The following are photographs of key moments during the protests and crackdown:

The April 15, 1989 death of Hu Yaobang, the former Communist Party General Secretary and a liberal reformer who protected many intellectuals who spoke out against government repression, triggered the Tiananmen protests. University students placed hundreds of wreathes and banners at the Monument to the People's Heroes on Tiananmen Square to memorialize Hu and protest his 1986 ouster over previous student protests. 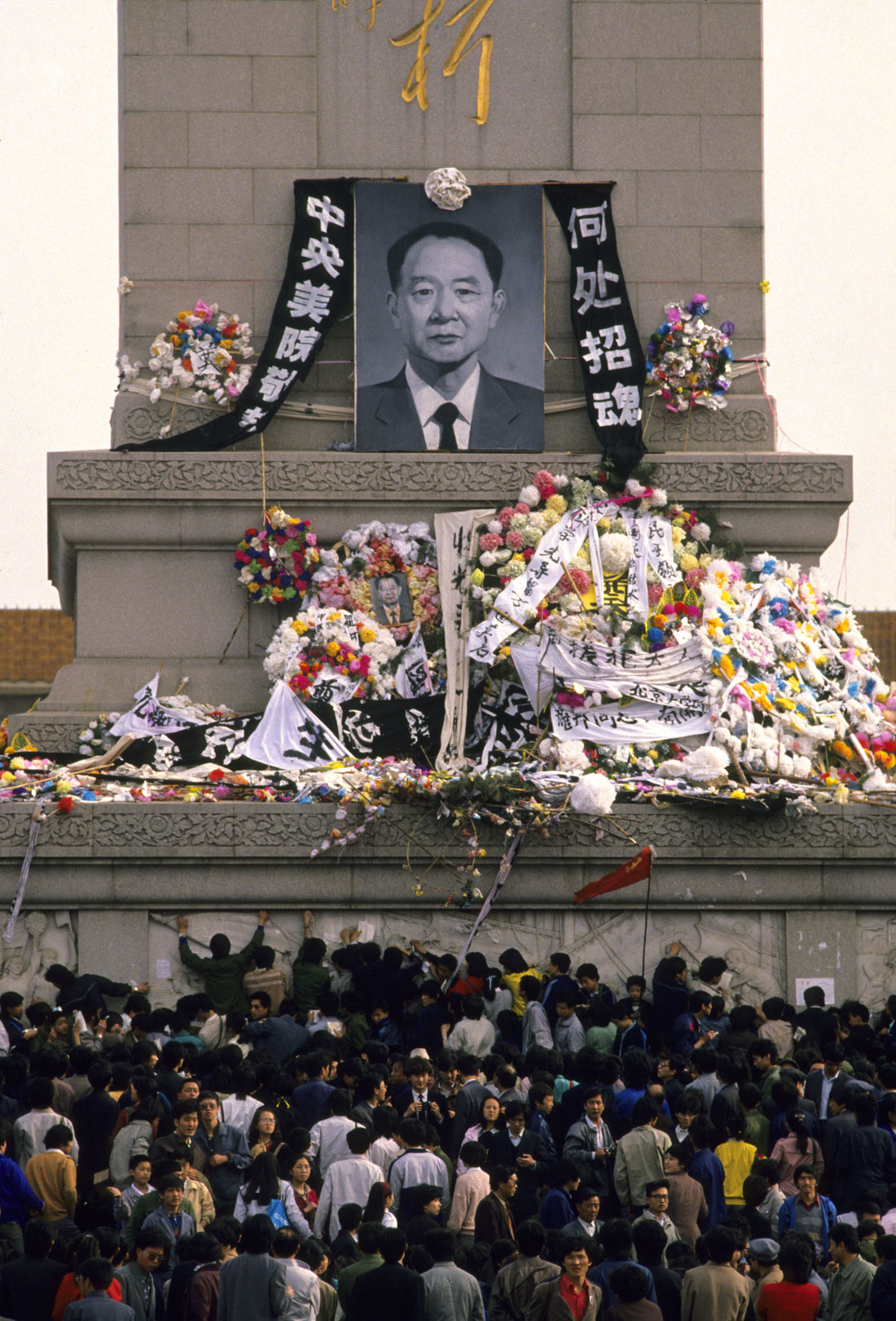 The mourning quickly turned into protests demanding more democracy, an end to corruption and better treatment of intellectuals. Here, students staged a sit-in in front of the Communist Party headquarters, Zhongnanhai, where China's top leaders lived. 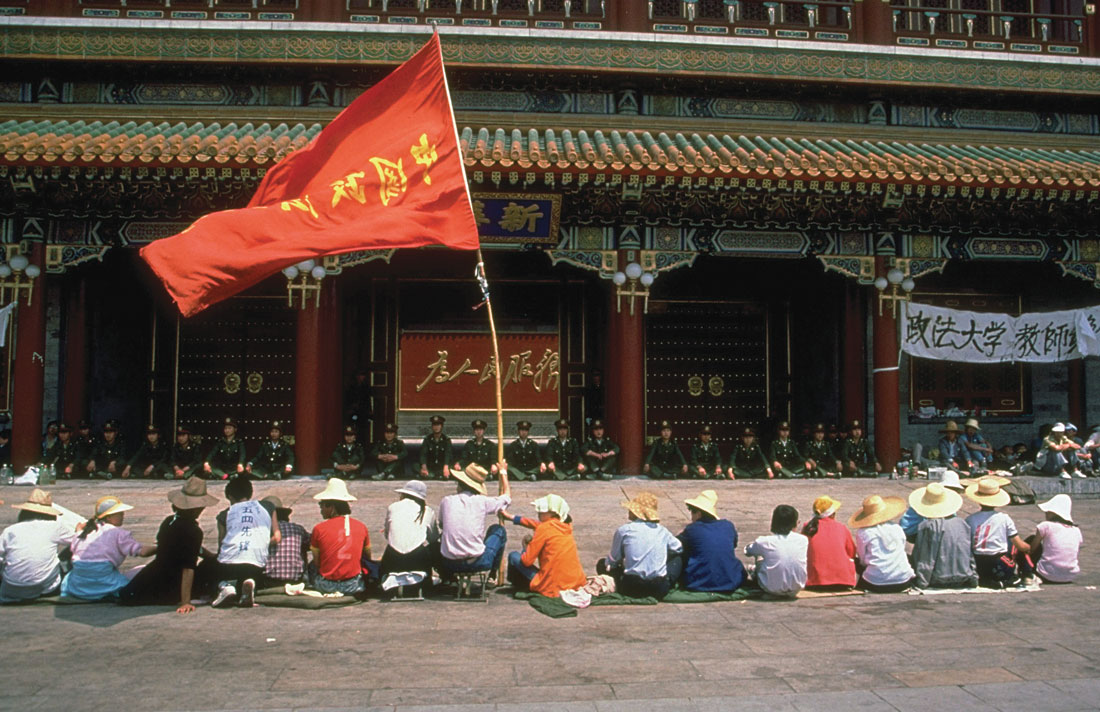 The government initially tolerated the protests but then issued an April 26 editorial in the People's Daily labeling the demonstrations as "turmoil," a politically charged condemnation from the 1966-1976 Cultural Revolution. The outraged students staged what became the largest demonstration in Communist China's history on April 27, attracting more than a million participants. 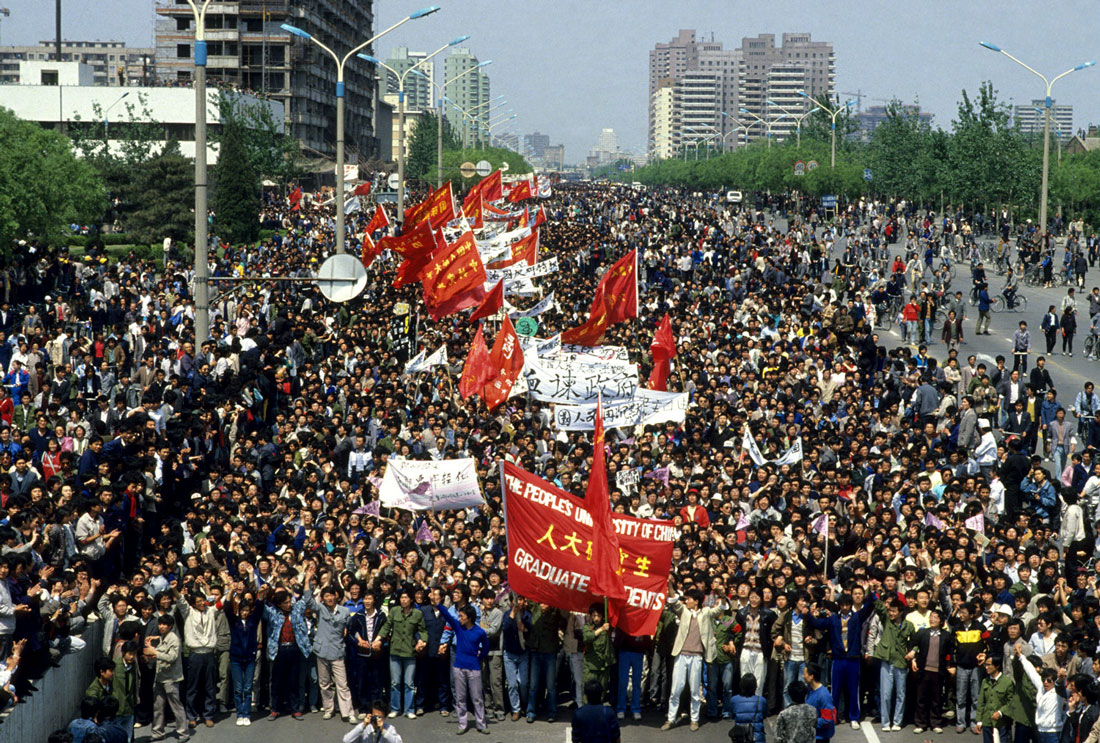 Students from universities all over the city and from other areas poured into the city to particiipate, occupying Tiananmen Square for weeks. Below, a student flashes a peace sign. 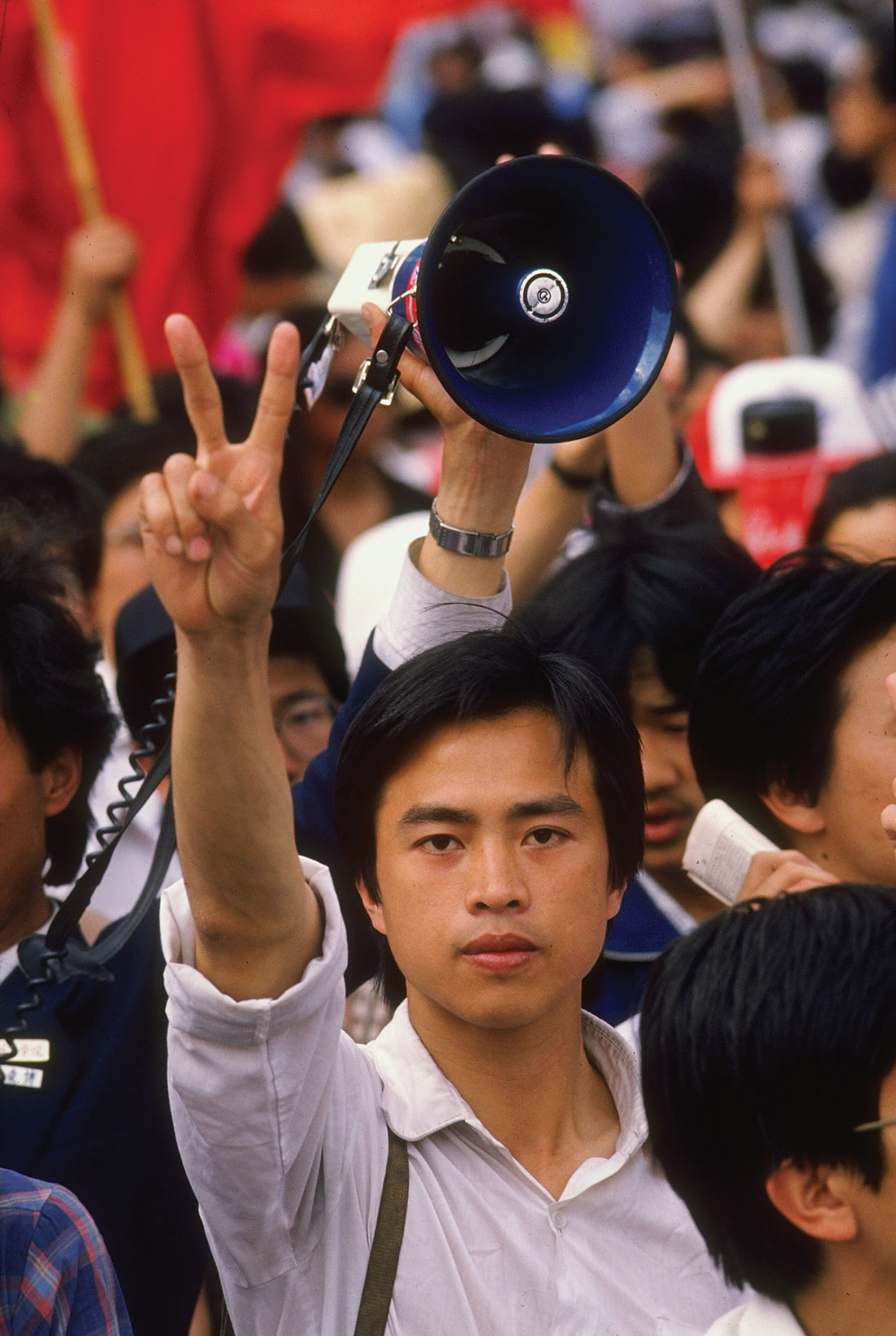 The demonstrations quickly spread to other cities. Below, students protested along the Bund in Shanghai, China. 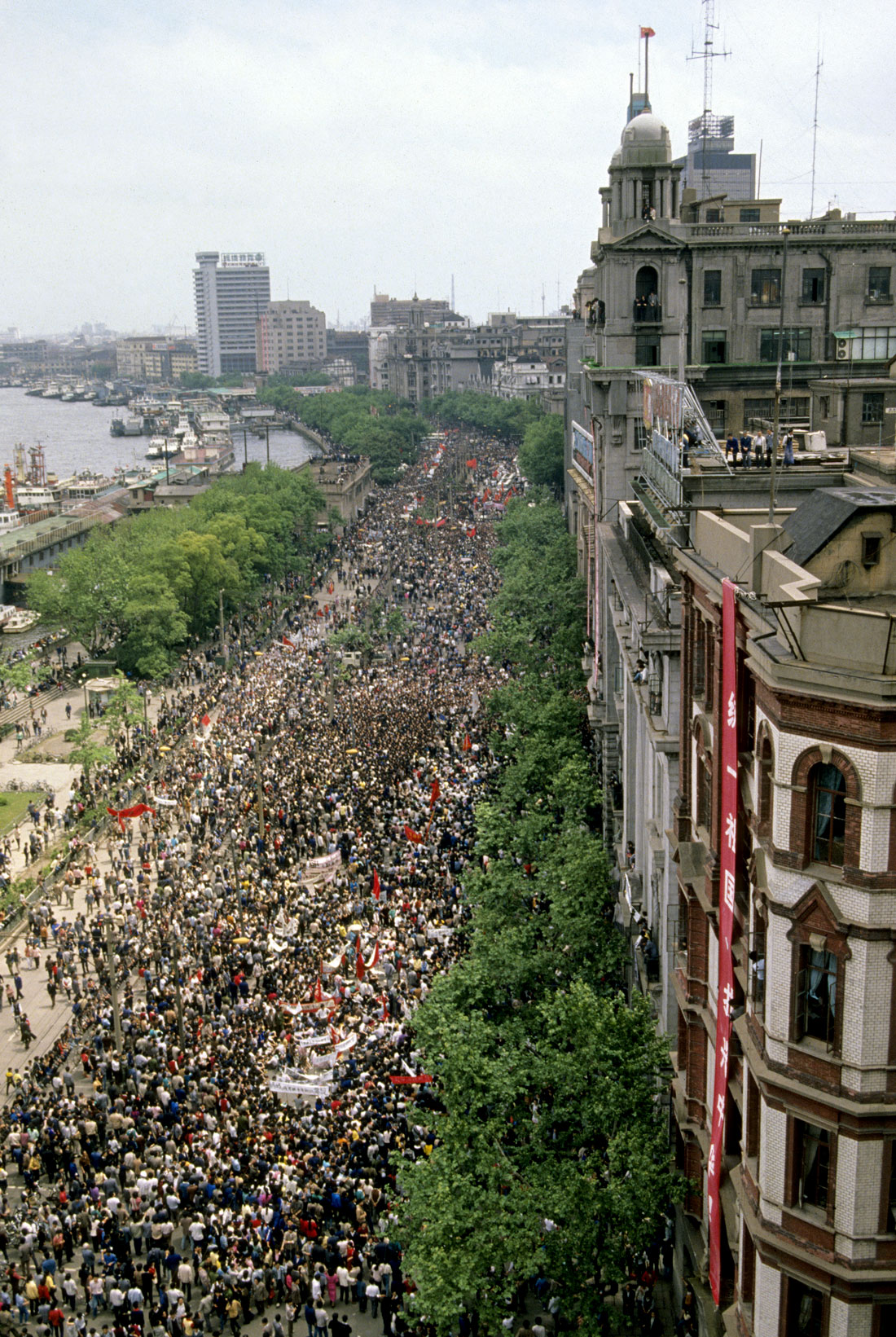 Unable to persuade the government to acquiesce to their demands, students  launched a week-long hunger strike with a march (below). 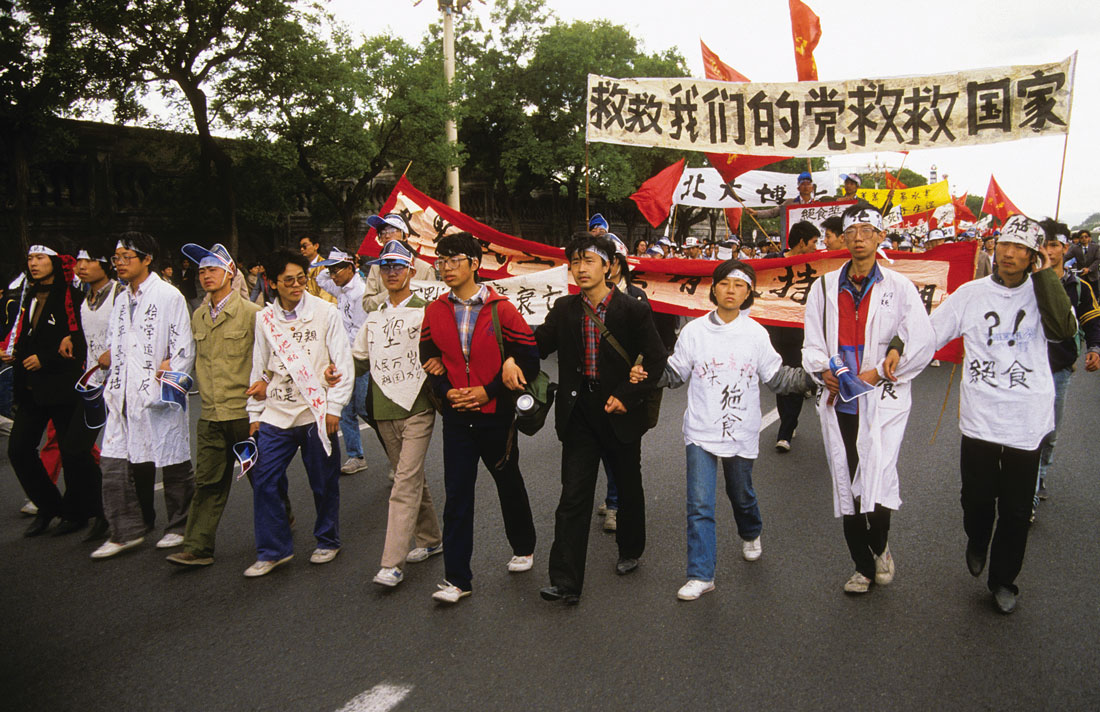 The government declared martial law in parts of Beijing but was unable to enforce it because Beijing citizens poured into the streets to block trucks full of troops trying to move toward the square. Students erected a statue called the Goddess of Democracy, below, at the square. 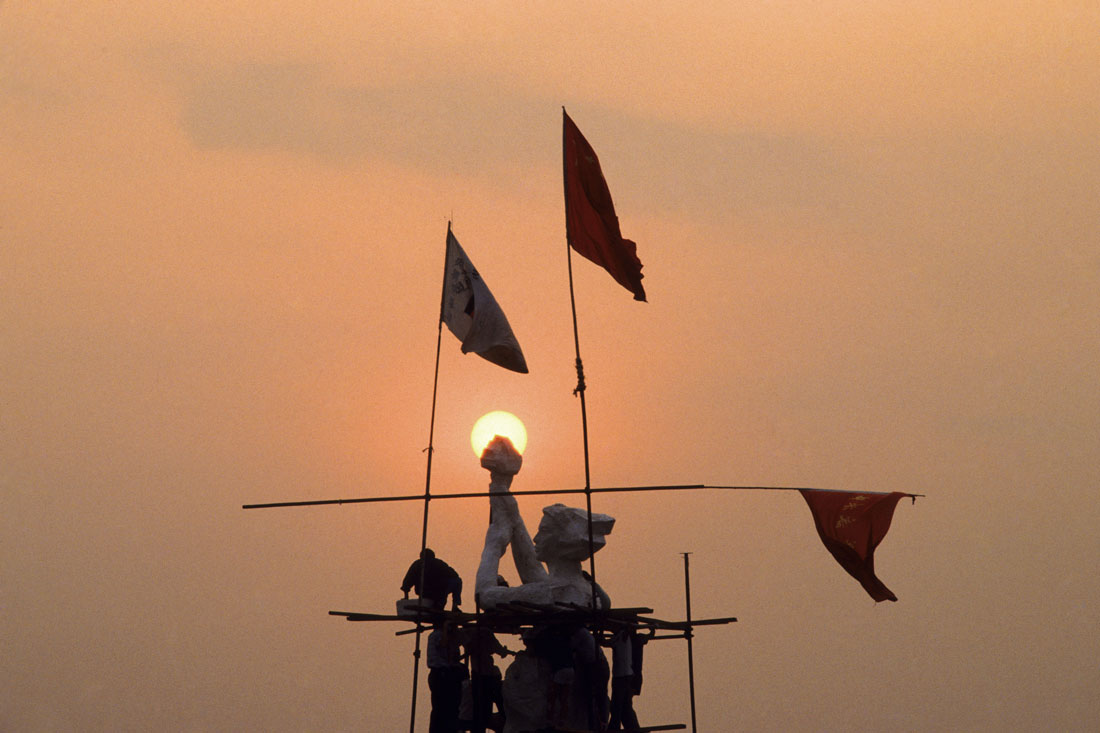 On June 3-4, troops reinforced with tanks and armoured personnel carriers moved into Beijing in a crackdown that turned violent when soldiers began shooting into the crowds while moving against heavy resistance toward Tiananmen Square. Hundreds of civilians and some soldiers were killed and wounded. 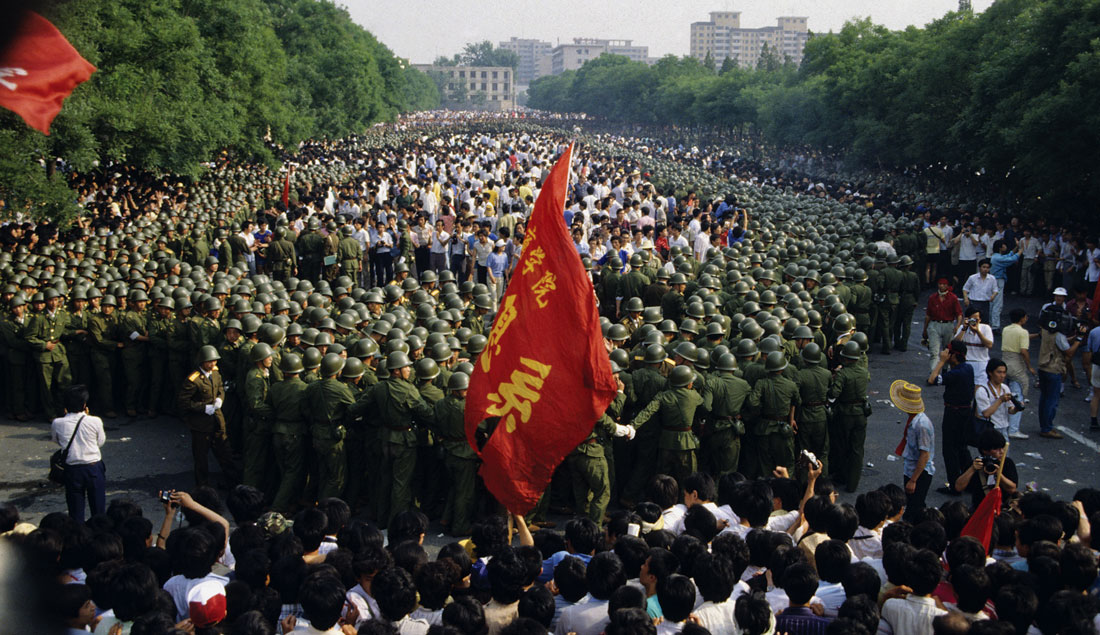 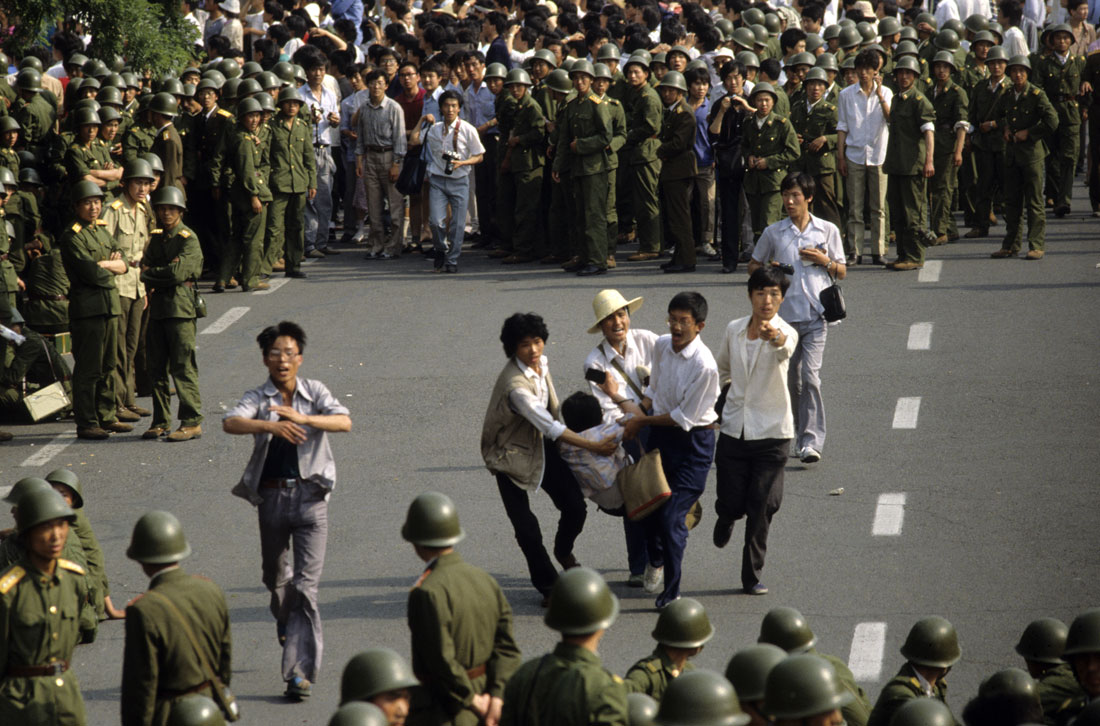 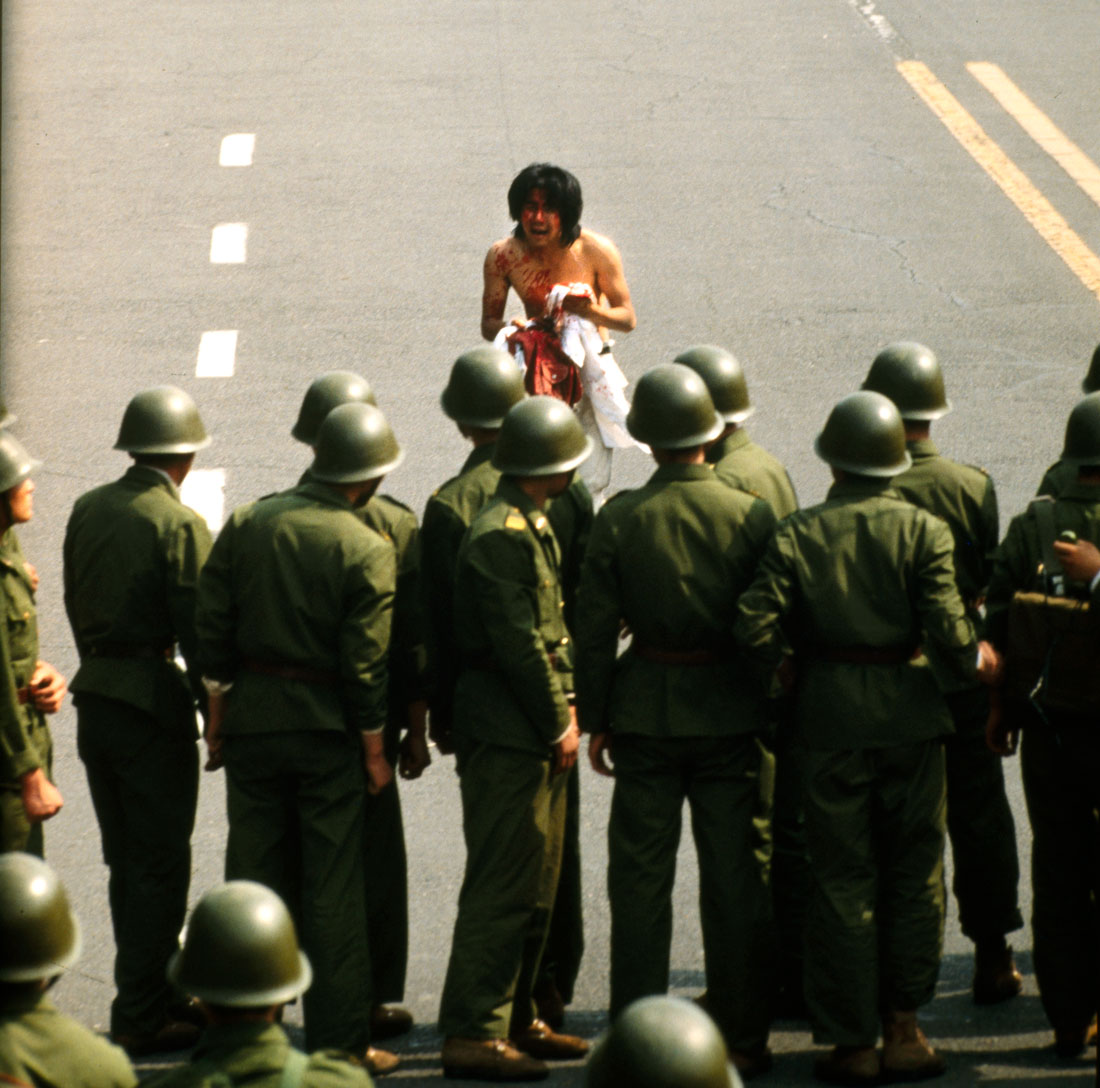 Below, tanks moved through a barrier of public buses that citizens placed across Beijing's main avenue to stop the troops. A brutal crackdown followed the June 4 massacre, with thousands of people rounded up and punished. The main leaders of the protests as well as some of their supporters were imprisoned, some for over a decade, and many officials who opposed the crackdown were sidelined. 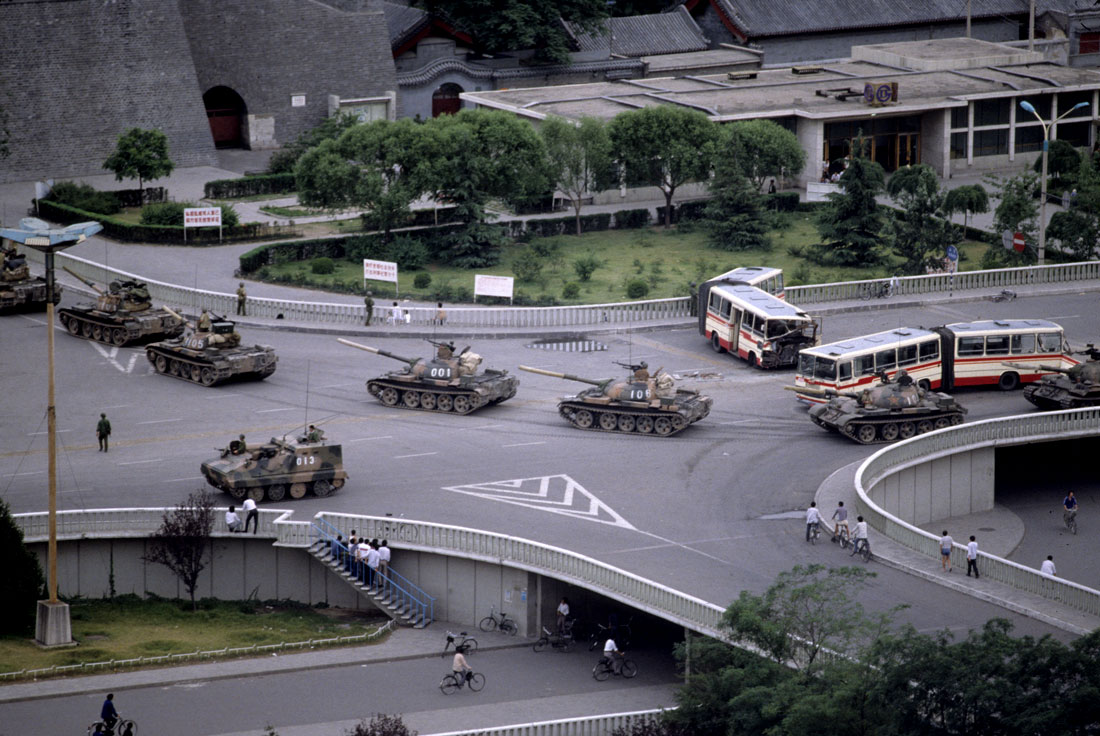 The April 26, 1989, editorial remains the official government verdict on the protests, although a number of officials have made less severe statements over the years. Since then, the tension between calls for democracy and the government's stance have been recurring issues in Chinese politics, although the parameters of personal freedom have greatly expanded and shifted over the years. The massacre also has been a continuing factor in China's foreign relations, especially between China and the United States.

China's Oct. 1 celebration of 70 years of Communist rule centers on Tiananmen Square, one of the world’s most controversial places.

Only scattered remnants survive of the many walled cities that once defined the Chinese empire.

The Summer Palace, the most famous and heartbreaking of China's glorious imperial gardens, highlights dilemmas in the nation’s past.

In the French palace at Fontainebleau is a treasure room of dazzling artifacts taken by the French army from a palace in Beijing.