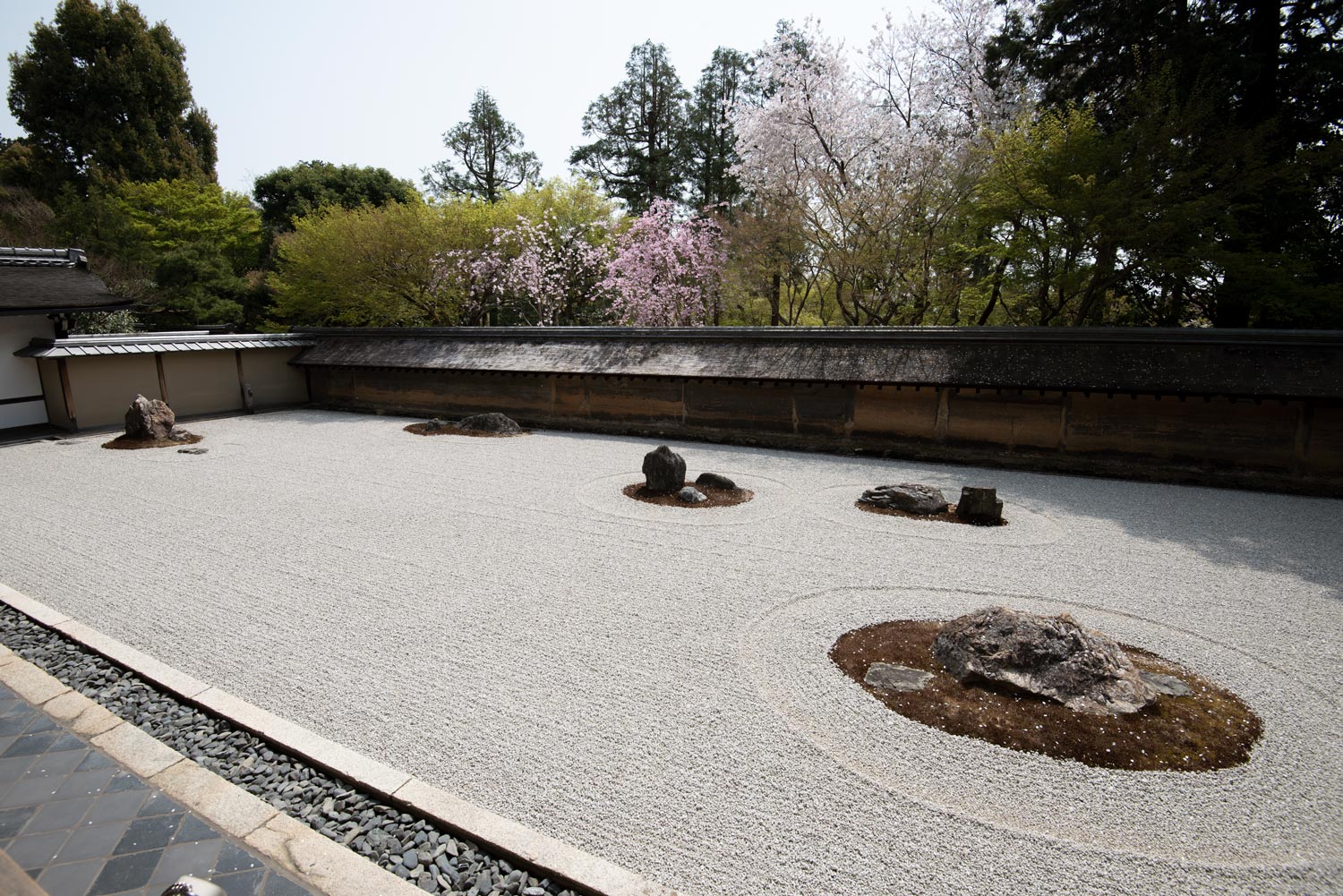 Years ago while living in Asia, I developed a serious respiratory infection which in turn affected my heart. I went to see a Western-trained Chinese cardiologist in Hong Kong who did a series of tests. He then sat me down and told me that if I wanted to get well, I needed to abandon a Western lifestyle, which with its unrealistic expectations, constant activity, stress and overconsumption of goods, food and activities was lethal to the heart and lungs. Instead, he prescribed a vastly simplified lifestyle that included daily meditation and restful practices such as Japanese flower arranging. I walked out of his office and headed for the nearest bookstore with his list of recommended pastimes and practices. The stack of books I bought transformed both my health and enjoyment of life.

Foremost among his recommendations that made a major difference was daily meditation. I recall his wise advice annually as I emerge from the busy, exhausting holiday season and renew my commitment to a simpler lifestyle.

The topic of meditation turns my thoughts to the dry rock garden at the Zen Buddhist temple, Ryoanji, in Kyoto, Japan. This simple, enigmatic garden has become one of the world’s most well-known symbols of the practice of meditation. It’s a fitting one for many who are heading into 2020 with hopes of a simpler, less anxious and more orderly year.

The garden is Japan’s most famous dry rock garden, built to help people attain the Zen ideal of enlightenment through meditation. A million people a year from all over the world and with many different belief systems are drawn to the garden, which is considered the highest expression of Zen art. 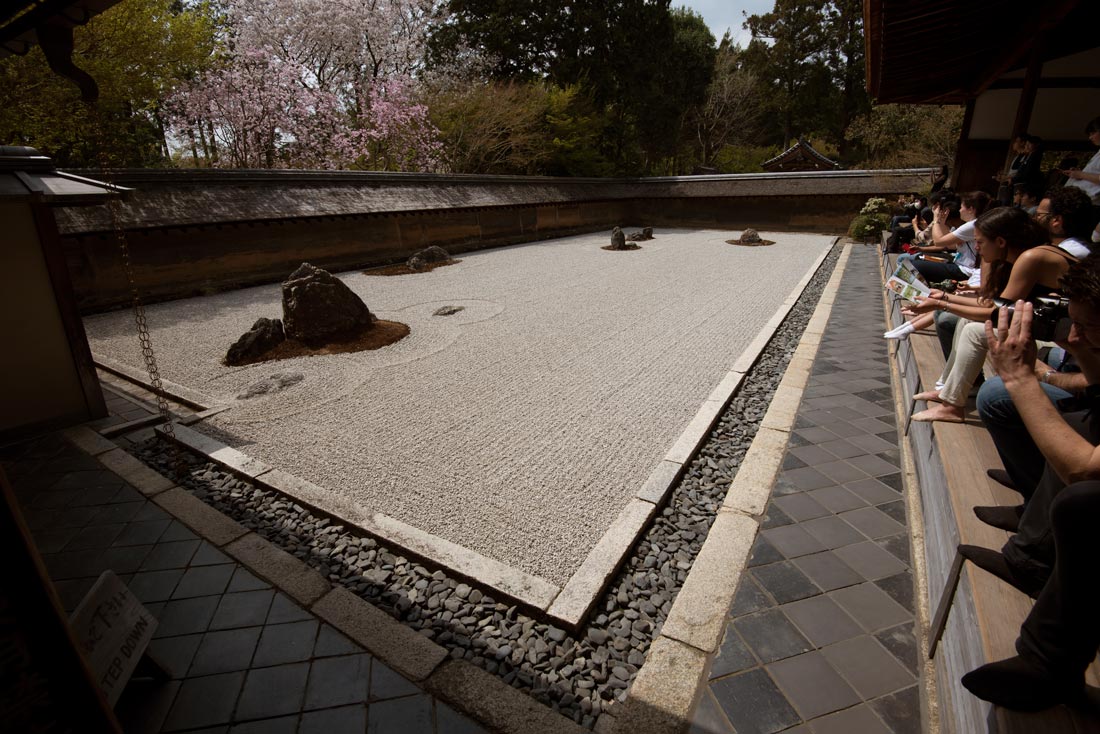 The 102 x 49-foot garden consists of 15 rocks positioned among white river pebbles that are carefully raked into patterns by the temple’s monks. No plants grow in the garden except for some moss around the rocks. No one walks in the garden – it is viewed from the veranda of the temple abbot’s residence. 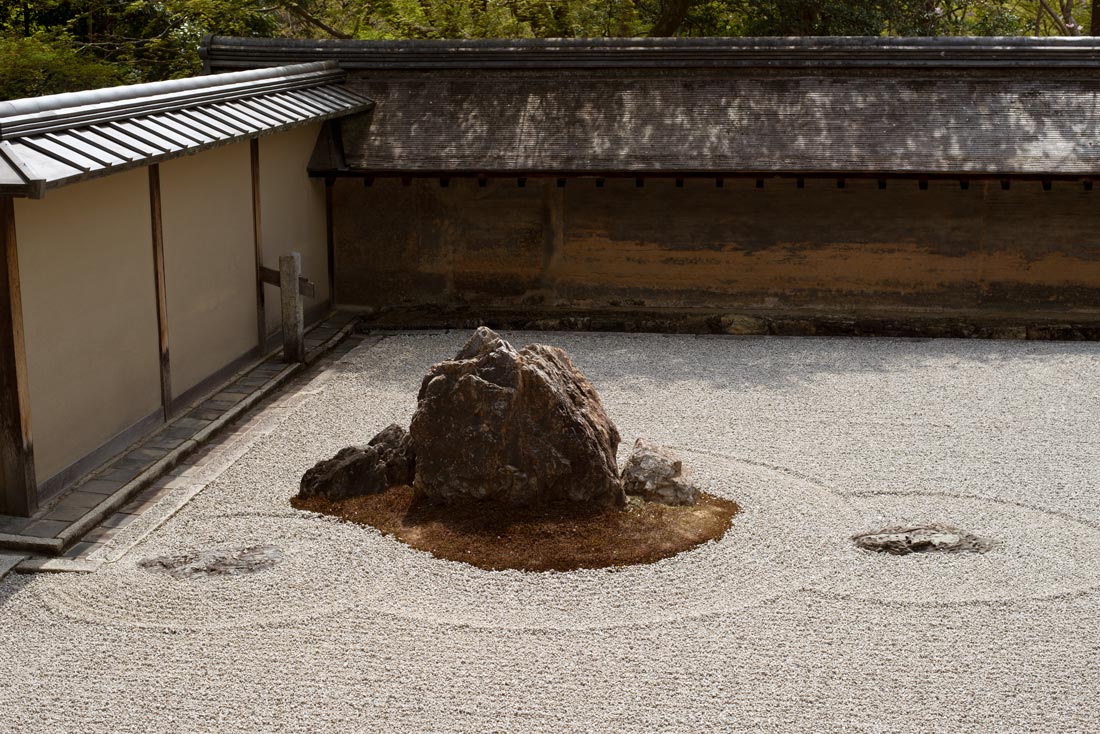 The rocks are laid out so that only 14 are visible at any one time from any angle on the veranda, possibly symbolic of the idea that the number 15 represents completeness and the hidden rock is hidden truths that can be comprehended  through meditation.  The simple rocks, surrounded on three sides by a rustic clay wall, have a mesmerizing sense of infinity that brings to mind different images to different people - islands in a carefully raked sea, mountains among clouds, animals swimming. The garden changes endlessly with the viewpoint, seasons and direction of shadows at different times of day, just as our lives do.

The use of white pebbles or sand in sacred sites is an ancient Shinto practice in Japan. The large white spaces of pebbles between the rocks bring a sense of calm and refreshment and a desire to simplify life.  Zen practitioners say that the garden is a perfect example of Zen principles of simplicity, suggestion and irregularity - characteristics thought to open the mind to meditation and enlightenment.

No one knows exactly what the arrangement of the stones mean, although there is a great deal of speculation based on Buddhist doctrines. Rearrangement of the stones in various depictions for studies about meditation have been shown to break the appeal that the rocks hold in drawing people into deep contemplation. The enigmatic nature of the garden seems to be part of what enables people to meditate in the direction that their own thoughts take them.

The garden is believed to have been built in the 15th century, possibly with only nine stones. The garden was redone in the 18th century and remains basically the same today. The garden and clay wall around it with its bark tile roof are famous examples of the Japanese aesthetic of wabi sabi, a simple, rustic aesthetic that rose to popularity as a backlash to the opulence before the Onin War. 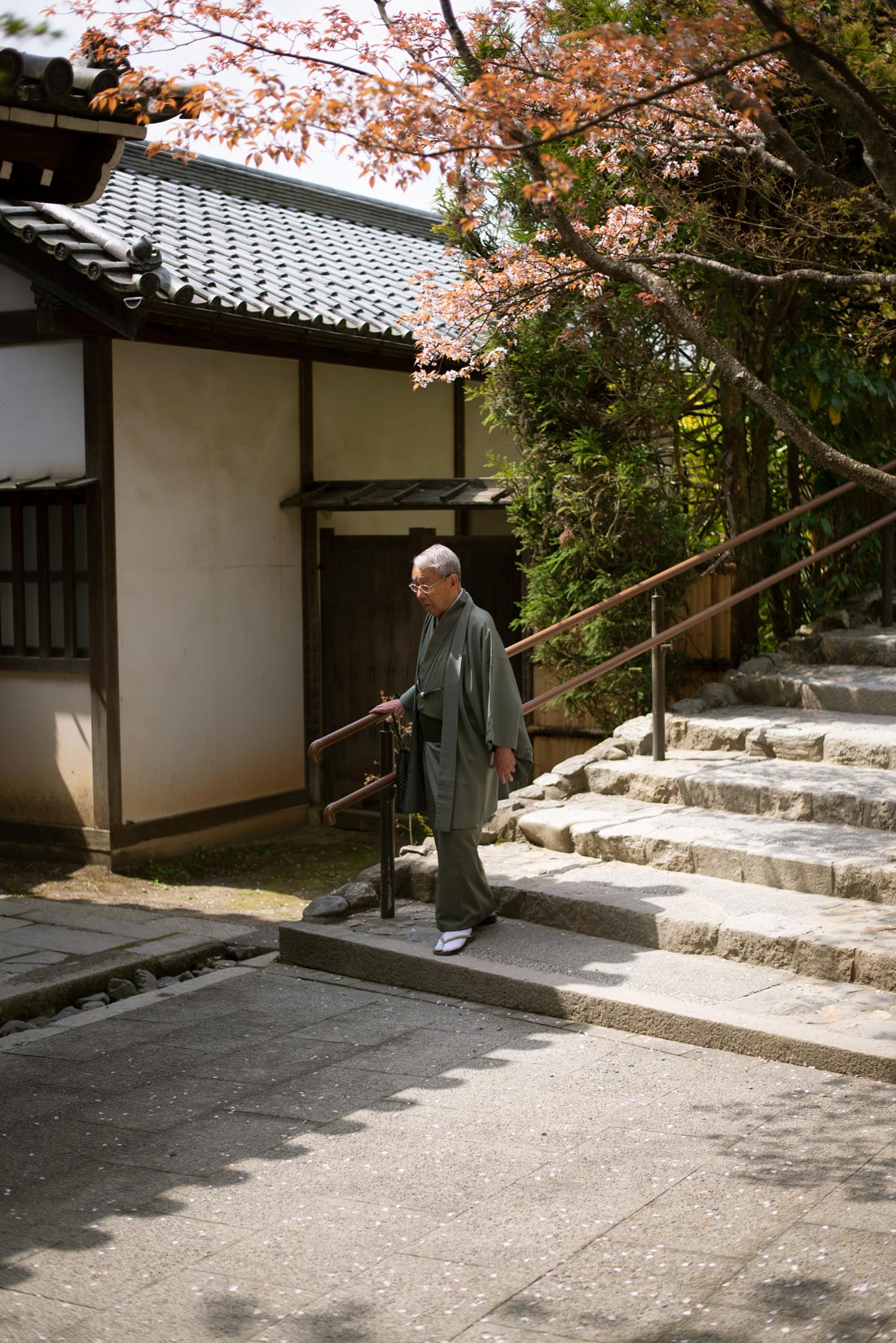 Japanese such as this man often dress in traditional clothing to visit historical temples such as Ryoanji.

Zen Buddhism is derived from Chan Buddhism which was introduced to Japan from China in the 12th-13th century. It became popular in the mid-15th century. Zen emphasizes contemplation to reach enlightenment. Certain things can assist an individual in this process, among them the use of minimalist rock gardens.  Chinese Chan paintings have a sparse monochromatic style similar to the style of the garden. The sect promotes aesthetic values of rustic simplicity and use of natural materials.

The temple’s site was that of an estate belonging to the Fujiwara clan who dominated Japanese politics in the Heian period (794-1185). A temple and a large pond that is still at the site were built in the 11th century by a clan member. After the land passed to a powerful warlord, Hosokawa Katsumoto, in 1450, he founded Ryōan-ji. The temple was destroyed during the Ōnin War, but his son, Hosokawa Matsumoto, rebuilt it. The tombs of several emperors are at Ryōanji. The temple thrived as a great Zen center for the elite in the 16th-17th century under the Hosokawa family’s patronage.

The temple grounds also have a 17th century teahouse and water garden, near which is a famous stone basin that has continually flowing water for ritual purification through washing the hands. The user must bend over to use it, a sign of reverence and humility. Four characters on the stone basin, when read correctly, mean “I know only satisfaction.” This relates to Buddhist teachings that with abundance in the soul, one has all one needs. The basin is in the form of an ancient Chinese coin, an ironic sentiment that reminded monks at the temple daily of their vow of poverty. 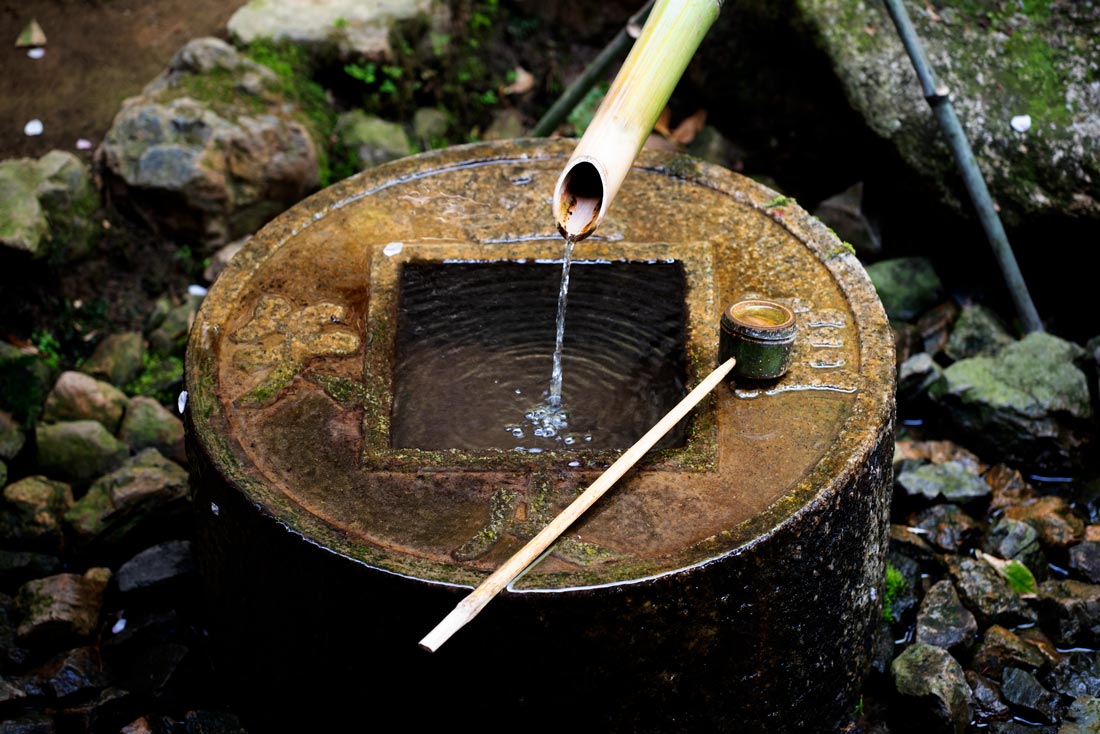 Visitors enter Ryoanji through a main gate and see the Mirror Pond to their left with a scenic view of mountains behind it. They walk along a pilgrim’s path and through a second gate where they see the main building, the abbot’s residence. The rock garden is in the front. The abbot’s residence has six rooms, with other gardens on each side – a moss garden, a stone and moss garden and a garden with a tea house. 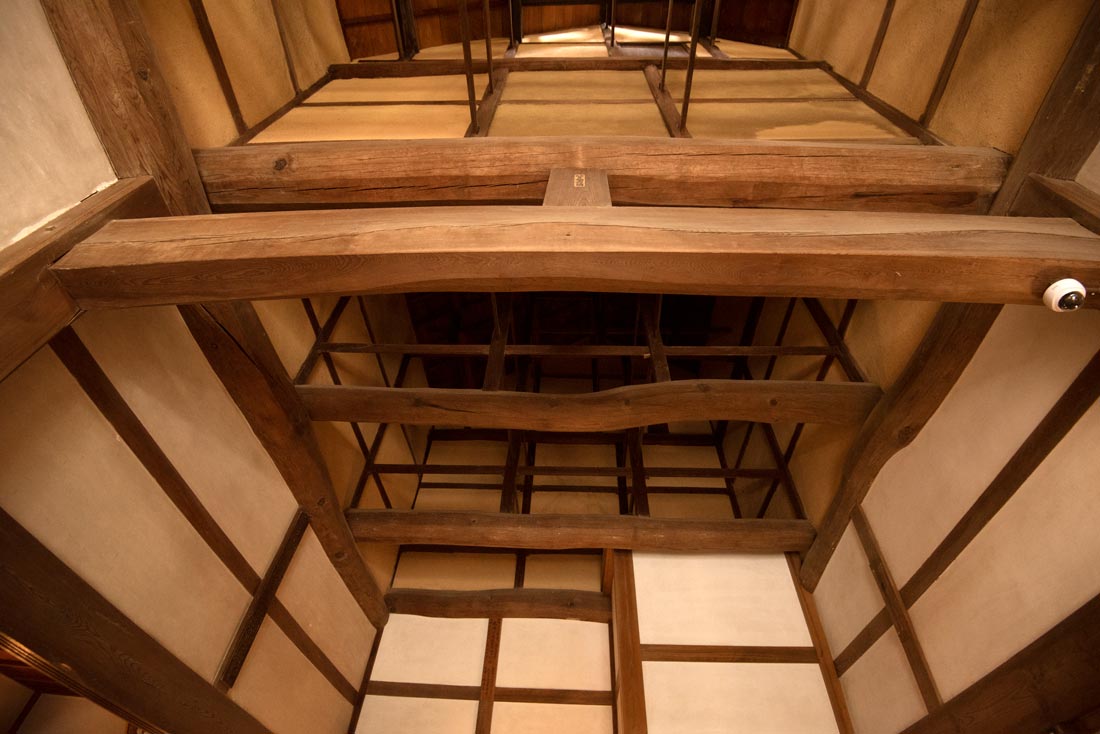 The abbot's residence and other buildings are prime examples of Zen architecture, with its extensive use of wooden beams and simple lines. 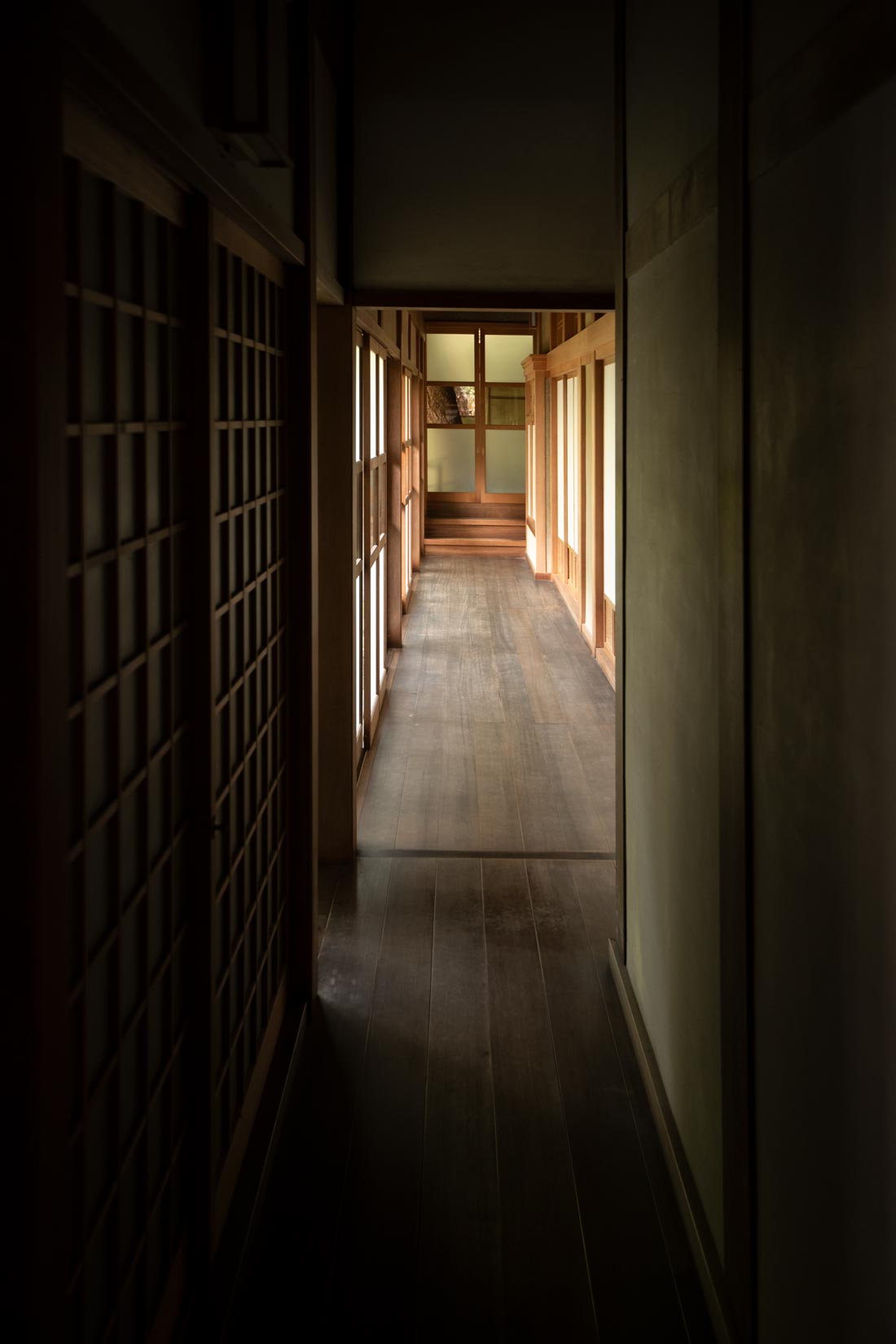 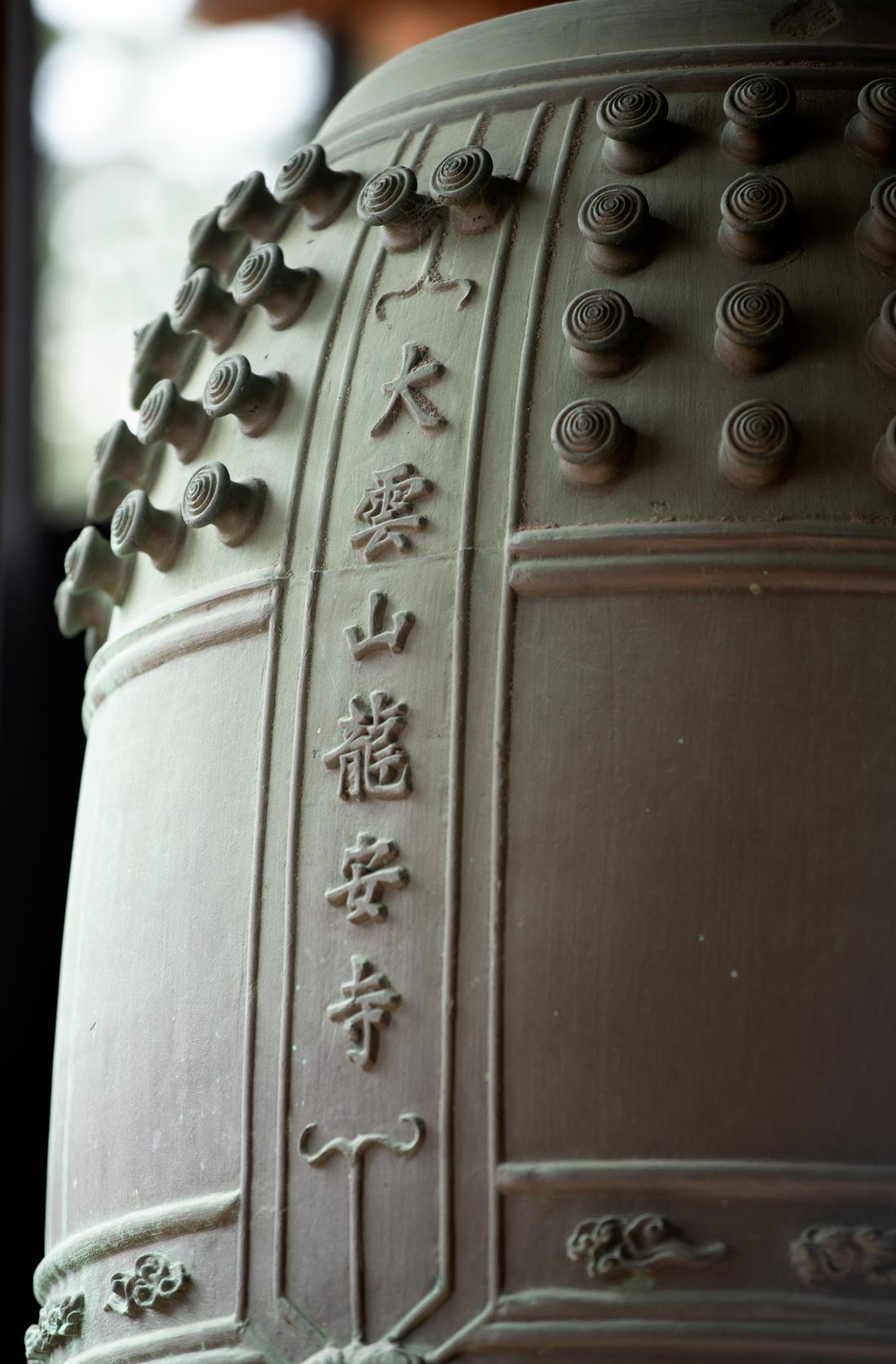 A bell at the temple.

A fire in 1797 destroyed all of the buildings at the site but spared the gardens. The buidings were rebuilt in 1800.

Wall door paintings once decorated the building but were removed and sold in 1895, when Buddhism was persecuted.  The works became part of the Metropolitan Museum of Art in 1989. They depict Chinese themes rendered with extravagant colors on golden backgrounds, a later samurai warlord influence.

The pathway around the pond inspires a sense of going on a journey of discovery as it takes walkers out of sight of the water except at seven specific viewpoints. 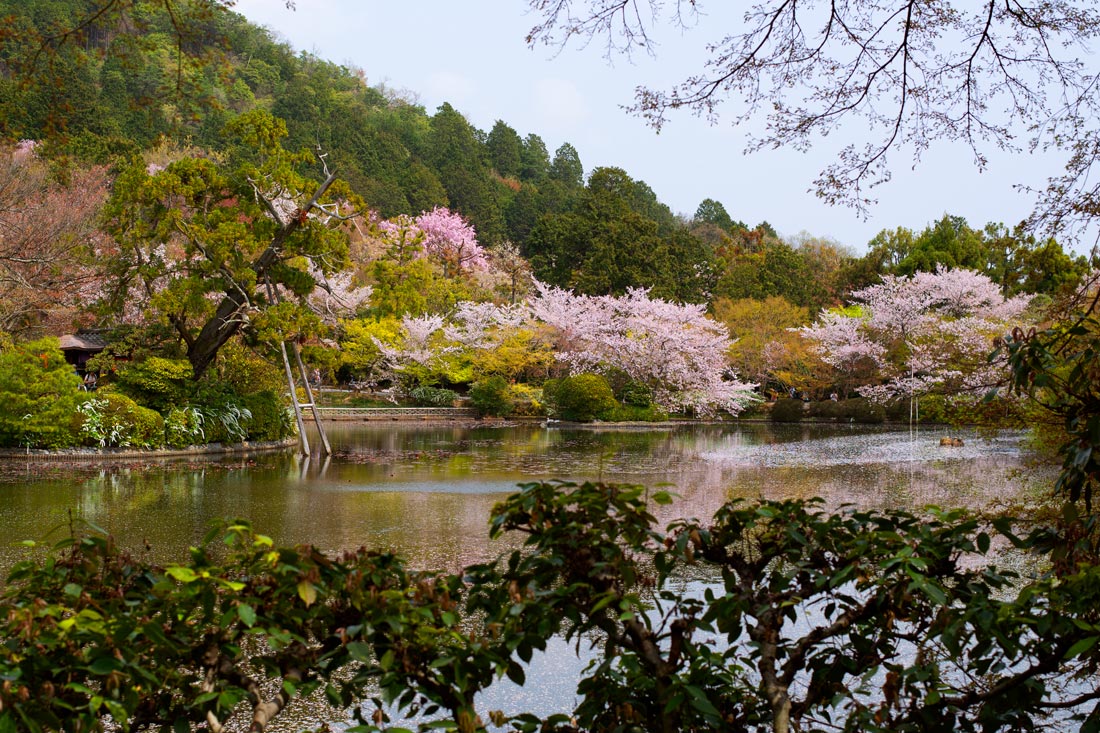 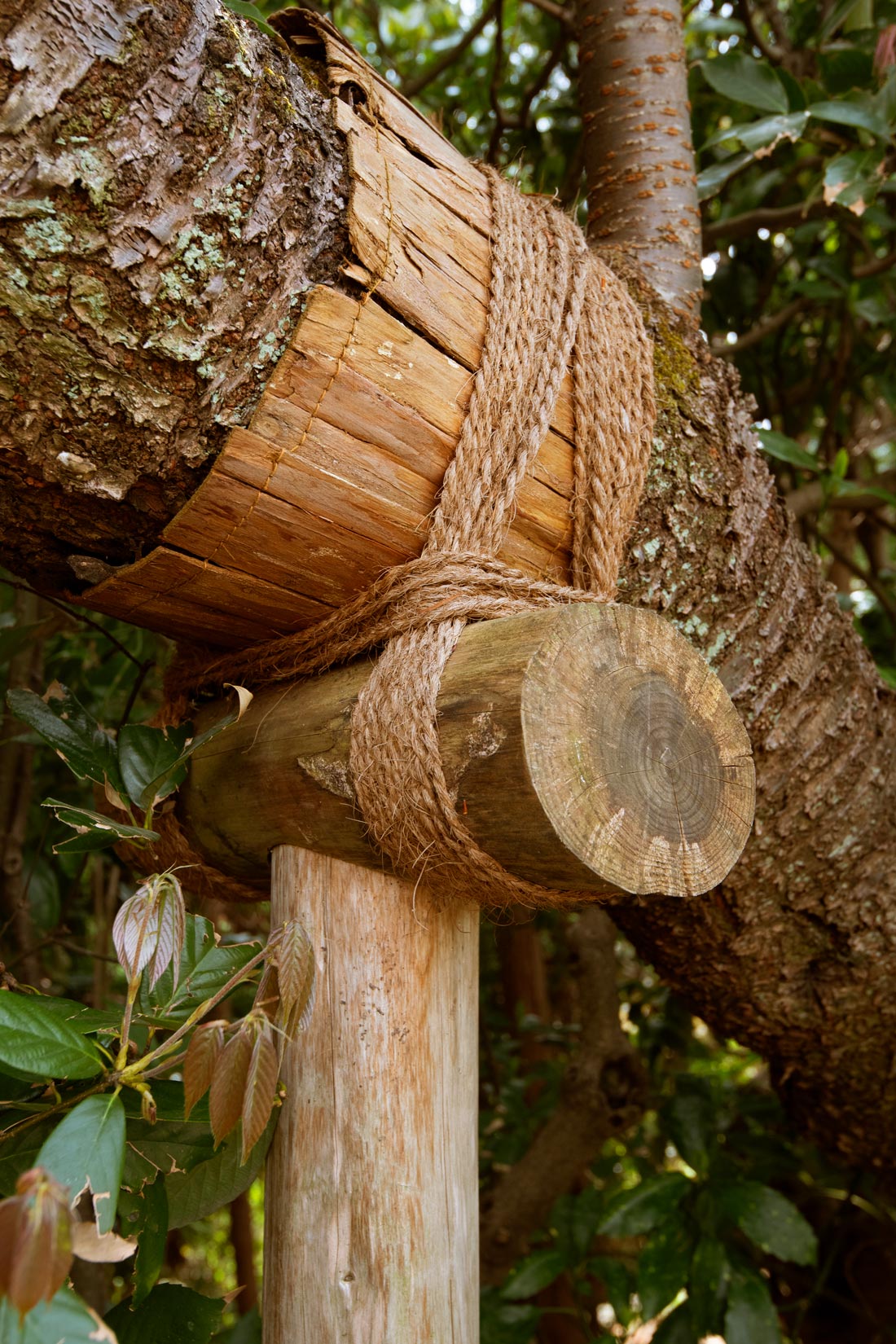 The gardens at the temple are carefully tended. Here, the limb of a tree is carefully propped up. 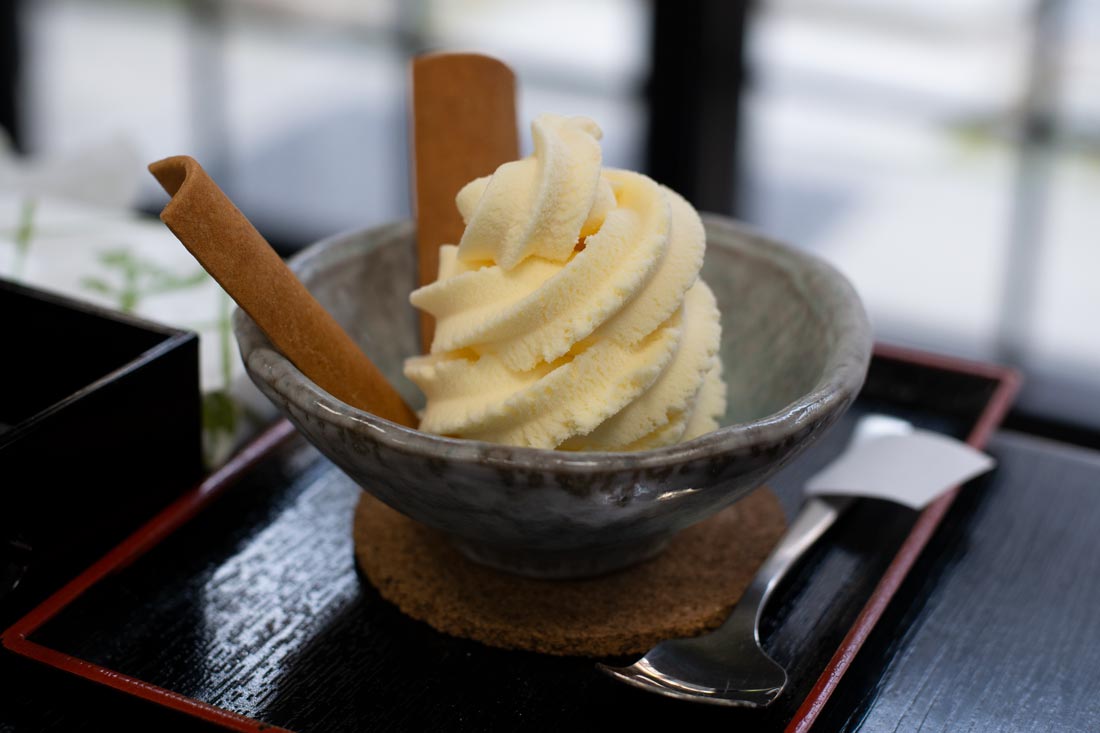 The cafe at the temple serves simple dishes in pottery made in the rustic Zen style.

You don’t have to go to Ryoanji, be a Zen Buddhist or sit cross-legged to incorporate the healthy practice of meditation in your life. Many people meditate while on a walk, driving in the car or exercising. Author Sharon Salzberg, who has written extensively about meditation, points out that meditation “is the ultimate mobile device; you can use it anywhere, anytime, unobtrusively.”

Learn gradually to meditate. “If you just sit and observe, you will see how restless your mind is. If you try to calm it, it only makes it worse, but over time it does calm, and when it does, there’s room to hear more subtle things – that’s when your intuition starts to blossom and you start to see things more clearly and be in the present more. Your mind just slows down, and you see a tremendous expanse in the moment. You see so much more than you could see before,” Apple founder Steve Jobs said.

Eventually, as author German poet, author and painter Hermann Hess said, you will find within yourself a stillness and sanctuary into which you can retreat at any time and be yourself.

You can use this inner space to make and prioritize realistic goals. Meditation can help you organize your thoughts, be less angry and anxious and more aware of your beliefs and values. This can help you make goals that you really want to achieve and eliminate things from your life that you don't want. It can help heal distracting wounds so you can decide what you want to focus on. You can prioritize that which interests you and what you want to change to lead a healthier life. Daily meditation can enable you to change and adjust your goals as you move along so you don’t feel defeated when they prove unrealistic.

Meditation helps you decide on the scope of your concerns. Are they a single challenge that needs only a small amount of attention for a short time or do they require long-lasting personal transformation or resolution of important issues? Allow the scope to change as you move forward.

If you are religious, you can include prayer in your meditation time.

Keeping a journal of your thoughts and feelings, fears and expectations as you meditate can be helpful in sorting out issues you may be concerned about. It helps you identify thought patterns so you can focus on changing or developing them and make concrete plans to do so.

Many people read sacred texts as part of meditation. This can help you to understand the broader historical context of your questions and concerns and point you in new directions.

Exercise – Many people consider the body to be a temple for the spirit. Maintaining it through eating healthfully, abstaining from addictive substances and exercising can help elevate your mental, emotional and spiritual sense of well being and quality of life. These practices work hand-in-hand with meditation.

Having a quiet place to engage in meditation and related practices at home or in a nearby park or a garden can promote your sense of well-being. You can include meaningful images and meditative music, but there also is much to be said for the substantial white space in the Ryoanji rock garden. Simple, uncluttered spaces can be helpful in meditation.

As you do these activities, notice the effect on your life and relationships over time. For many people, it is transformative. 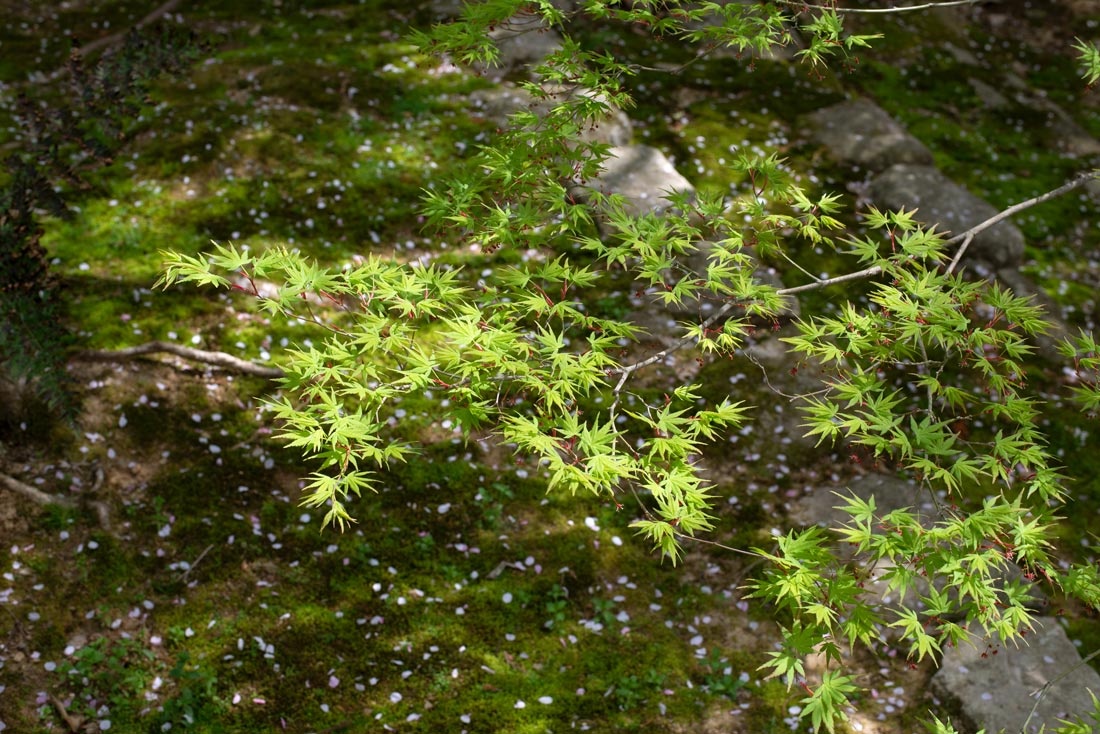 Elements of a Japanese Garden

Imagine you're sitting in Los Angeles traffic on a hot day. Take a break and head for a cool green oasis - Suihoen Japanese Garden

Modernist architects admired Katsura Villa as the pinnacle of Japanese architecture and design. It is more complex than they thought.

Japanese Design Past and Present

What makes a retreat restful and soul restoring? A former imperial retreat in Kyoto, Japan, gets retreat design just right.

A Palace to Remember

Visible traces of the Heijō Palace, Japan's palace from which the emperor ruled in splendor, were gone, until the site was restored.

An emperor built a giant Buddha to unify his struggling country, as the center of a network of Buddhist temples throughout Japan.